Why shouldn’t I be president of Zimbabwe, asks Grace Mugabe? 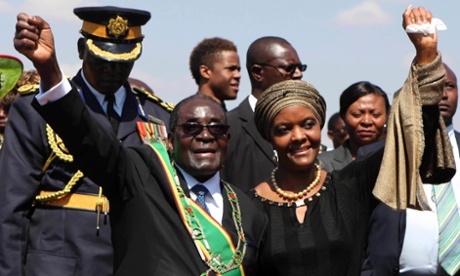 Grace Mugabe has added fuel to speculation that she wants to become the next president of Zimbabwe in remarks that suggest the ruling party could be heading for a damaging split.

In widely-reported comments at a rally outside Harare on Thursday, the wife of the current president, Robert, said: “They say I want to be president. Why not? Am I not a Zimbabwean?”

The remarks formed part of a vitriolic tirade against current Zimbabwean vice president Joice Mujuru. Mugabe described Mujuru as “ungrateful, power-hungry, daft, corrupt, foolish, divisive and a disgrace”, and accused her of collaborating with opposition forces and white people to undermine the country’s post-independence gains.

She has previously claimed that Mujuru is corrupt and bent on fomenting divisions within the ruling Zanu-PF party. When Grace and Robert Mugabe returned from a trip to the Vatican this week, Grace reportedly refused to shake Mujuru’s hand at the airport.

Grace Mugabe’s public attacks on Mujuru have been gaining force in recent weeks. Since being nominated as head of the Zanu-PF Women’s League, Mugabe has embarked on a series of Meet the People rallies around Zimbabwe – dubbed “the Graceland tour” by local media. The first lady appears to share her husband’s taste for lengthy oratory.

While Mugabe’s onslaught against the vice president has fuelled speculation for some time that she might have an eye on the presidential seat herself, Thursday’s address is the most concrete sign of her political aspirations to date.

Robert Mugabe’s presidential term officially ends in 2018, but there are rumours that fading health could keep the 90 year-old leader from seeing it out. He has yet to publicly endorse any successor, but his silence on his wife’s comments is being read in some quarters as a tacit blessing on her candidacy.

Zimbabwean political analyst Vince Musewe told the Guardian last month, however, that he believed the idea that Grace Mugabe might succeed her husband was a “sideshow”.

“She doesn’t have the gravitas to lead Zimbabwe,” Musewe said.

Known as Amai (mother) to her supporters and DisGrace to her detractors, Mugabe raised eyebrows last month when she graduated with a PhD from the University of Zimbabwe in record time, despite showing little evidence of academic aptitude beforehand.

Zimbabwe’s vice president is not the only figure who has come in for a recent tongue-lashing from Grace Mugabe. During one rally, she reportedly called the 2012 death of journalist Heidi Holland – author of Dinner With Mugabe – a form of divine justice.

“There is a woman who wrote a book saying Mugabe’s wife is a dreadful person. I simply took that book and prayed to God, [saying] if this is true, reprimand me, but if they are lies, deal with this person. The woman killed herself as a result,” Grace Mugabe was quoted as saying. 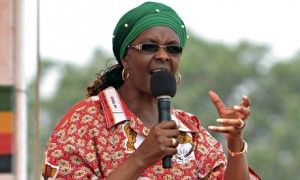 Grace Mugabe at her first political rally in Chinhoyi. She is expected to become head of the Zanu-PF women’s league. Photograph: Philimon Bulawayo/Reuters

“I told the president that if you don’t dump that faction leader we will dump her ourselves,” Grace Mugabe said on the campaign trail, referring to the vice-president and Robert Mugabe’s one-time heir apparent, Joice Mujuru.

Mujuru and the powerful justice minister, Emmerson Mnangagwa – who in the past controlled the secret police and military – are seen as the leading contenders to replace the 90-year-old Mugabe when he steps down or dies.

But Grace Mugabe’s recent entry into politics, swift rise to power within the ruling Zanu-PF and ferocious attacks on Mujuru, have raised the prospect that the vice-president’s star is waning.

It has also raised speculation that Mugabe could be grooming his wife to take over when he dies.

“We campaigned for you [Mujuru] not only last year, but over the years, but now it is war because I have been nominated,” said Grace Mugabe, 49, who is likely to become head of Zanu-PF’s influential women’s league.

“I do not think anything good would come out if I mobilise people to go in the streets and dump you,” she was quoted as saying by state media on Friday.

Grace Mugabe accused Mujuru – the widow of the late liberation war guerrilla commander Solomon Mujuru – of leading a faction vying for power, and demanded that she apologise.

“You cannot continue denying that you lead a faction every day. Wherever you are, go together with your cronies, go and apologise before it is too late because the president is also fed up with these issues,” Grace Mugabe said at a rally in Bindura, north-east of the capital, Harare.

Her comments appear to be an opening gambit in the endgame to succeed her husband. Zanu-PF will hold a crucial elective congress in December. Robert Mugabe is expected to be confirmed as the party’s leader, but the fight for positions on the powerful politburo could be decisive. Mugabe has been in power since 1980 and has long avoided appointing a successor.

Although racked by a seemingly interminable economic crisis, Zimbabwe is home to one of the world’s largest diamond fields. Many of the proceeds are thought to bypass state coffers to go straight into the pockets of well-connected politicians and the military.

The Mujuru family owns River Ranch diamond mine in southern Zimbabwe, close to the border with South Africa.

“The person leading factions is the same person who accuses me of being involved in diamond deals, yet it is them that own a diamond mine,” Grace Mugabe said.

“That person also moves around saying I want to acquire money using unscrupulous means when it is known that I started my business from scratch.”

Uncertainty over Mugabe’s succession and concern over his age and failing health have divided the government and stalled growth in the ailing economy, with investors adopting a wait-and-see attitude.

D’Banj Flops In Zimbabwe, Gets Booed Off Stage... November 3, 2013 | konknaijaboy 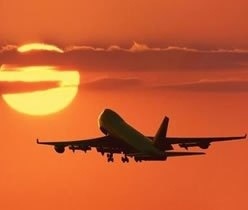 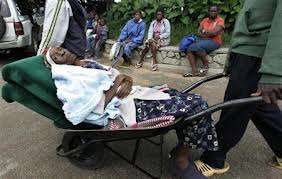 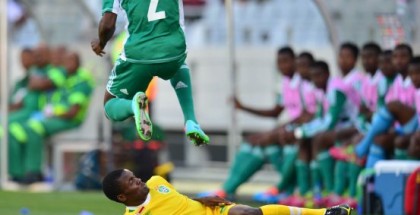