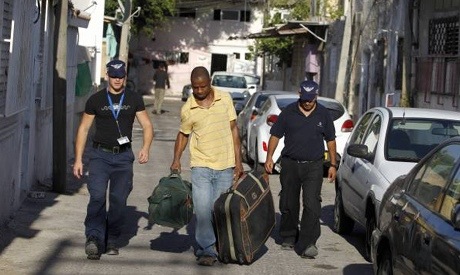 Israeli immigration authorities said last year in June that they had arrested 300 African illegal immigrants since the start of a nationwide crackdown and that the operation was continuing.
“Three hundred were arrested and more than another 300 signed a pledge to return voluntarily,” Population and Migration Authority spokeswoman Sabine Hadad announced.

She did not give a breakdown of nationalities, but said that the majority of both groups were South Sudanese.

“Those who signed were almost all from South Sudan,” she said. “Those who were arrested were mainly from South Sudan, but not only; there were also people from Nigeria, from Ghana, from the Ivory Coast, from Moldova, the Philippines.”

In new reports Israel has reached an agreement to send thousands of African migrants to an unidentified country, according to a court document obtained Monday, a plan that has elicited criticism over its potential harm to the migrants.

The plan, if implemented, is an attempt to address one of Israel’s more pressing issues: what to do with an influx of roughly 60,000 African migrants who have sneaked into Israel from Egypt over the past eight years.

Their arrivals have put Israel in a bind. Many Israelis believe that the Jewish state, founded in part as a refuge for Holocaust survivors after World War II, has a responsibility to help the downtrodden. But others fear that taking in tens of thousands of Africans will threaten the country’s Jewish character and question the extent of Israel’s moral obligations beyond those of other nations.

Most of the migrants have come from Eritrea or Sudan, some fleeing repressive regimes and others looking for work.

Over the past year, Israel has taken a series of steps to halt the influx. It built a fence along the border with Egypt that has reduced the number of new arrivals from hundreds each month to just a trickle. Since last summer, it has imprisoned new arrivals while officials determine whether they meet the criteria for refugee status. Last year, Israel offered some migrants cash to leave voluntarily, warning they would be expelled otherwise.

Thousands of Africans still live in slums in Tel Aviv and other cities. Israel has been unable to deport most of them because they would face harm if they returned to their countries of origin.

According to the document, a state lawyer told the Israeli Supreme Court on Sunday that a deal was reached with an unidentified country to absorb some migrants and that Israel was in talks with two other countries to secure a similar agreement. The details of the arrangement were not disclosed, although the state’s lawyer, Yochi Gnesin, said the return of migrants would be “gradual.”

Later Monday, Prime Minister Benjamin Netanyahu voted in favour of a bill prohibiting migrants from removing money from the country before their final departure.

“We have stopped the infiltration phenomenon into Israel. Last month only two infiltrators entered Israel, compared to more than 2,000 a year ago. Now we are focused on the infiltrators leaving,” he said in a statement.

Critics said the deal reflects an abdication of responsibility by Israel and that Israel will not be able to properly monitor the migrants’ conditions once they are deported.

Tally Kritzman-Amir, an immigration law expert at the Academic Center for Law and Business in Tel Aviv, said that Israel could neither effectively supervise the conditions of deported migrants nor guarantee they would not be sent back to their home countries in the future.

“It is possible to transfer the migrants to a third country,” she said, “but the primary responsibility to the rights of the refugees still lies with Israel.”

Under the 1951 Convention Relating to the Status of Refugees, states are obligated not to send refugees to countries where they would face physical or political danger. It is not clear whether that obligates signatories, of which Israel is one, to monitor the refugees indefinitely after they are deported.

Few other details on the deal were immediately available. Israeli Army Radio reported the country was in east Africa and did not suffer from any unrest that would harm the migrants. Kritzman-Amir said that would make Uganda and South Sudan, which both have good relations with Israel, likely candidates, but she did not have inside information.

Gnesin said the countries involved in absorbing the migrants were doing so “in exchange for one thing or another,” although it was not clear what they would receive in return. The Haaretz daily said that Israel had agreed to provide agricultural expertise as part of the deal.

The Supreme Court on Sunday ordered the government to provide details of the arrangement, including the name of the African country, within seven days.

Tony Elumelu Advocates for Africapitalism as the Solution for Africa's Development

Headies Next Rated Davido finally gets his car... April 20, 2013 | konknaijaboy

I was utterly misconstrued”- Juliet Ibrahim on her previous statement regardin... July 6, 2013 | konknaijaboy