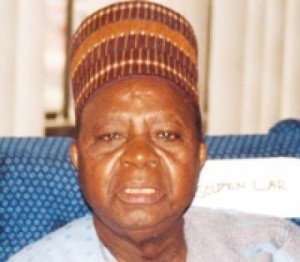 The Plateau government has announced the death of the first civilian governor of the state, Chief Solomon Lar.

“I can confirm to you that the family has confirmed to Gov. Jonah Jang that Chief Solomon Lar is dead,” information commissioner, Abraham Yiljap, said in Jos on Wednesday.

Born in Pongaa, Langtang, Plateau State in April 1933, Lar studied at the Sudan United Mission Primary School in Langtang, and then at the Gindiri Teachers College. After two years he returned to Gindiri for the Senior Teachers Training Programme, earned his Higher Elementary Certificate and started to teach at the Senior Primary School level.

Lar was elected as a councilor to the Langtang Natives Authority in January 1959. On 12 December 1959 he was elected to the Federal Parliament on the platform of United Middle Belt Congress (UMBC). He was reelected in 1964, and from then until 15 January 1966, when General Yakubu Gowon took power in a coup, Lar was parliamentary secretary to Prime Minister Abubakar Tafawa Balewa. He was also a Junior Minister in the Federal Ministry of establishments.

After the fall of the democratic government, Lar attended Ahmadu Bello University, Zaria, graduating in 1970 with an LLB and being called to the bar in 1971. He established a private legal practice, and was co-founder and first National Secretary of the Nigerian Legal Aid Association.

During the Nigerian Third Republic, Lar was a supporter of the Social Democratic Party (SDP). He was appointed Minister of Police Affairs by the government of General Sani Abacha, later resigning when he realized Abacha was not serious about restoring democracy

In the transition to the Nigerian Fourth Republic Lar became the first National Chairman of People’s Democratic Party (PDP) in 1998, holding this position until 2002 when he handed over to Chief Barnabas Gemade.[2] In February 2004 he resigned as chairman of the PDP Board of Trustees, handing over to Chief Tony Anenih at a caucus in Abuja.