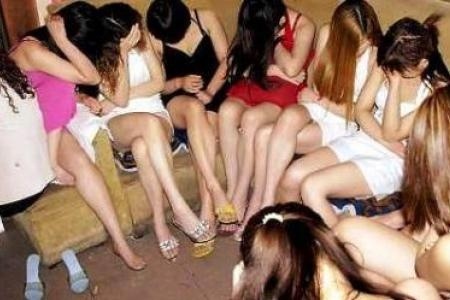 The Nigerian Immigration Service (NIS) has said that the 40 Chinese teenage girls earlier arrested on Sunday, at Emina Crescent, Ikeja, were brought into Nigeria on expatriate quotas of four Chinese owned companies operating in the country.

Consequently, NIS disclosed that the four companies including a popular iron melting company located in Ogba area of Lagos would be sanctioned for abuse of immigration/expatriate quota law of Nigeria.

A top immigration source disclosed that the service high command has been given the go ahead to handle the incident with utmost discretion and focus.

“We have the approval to sanction the four companies who decided to abuse their quotas. I can assure you that this is not going to be a child’s play because at the end of the day this organizations would have to face sanction, including heavy fines,” said a senior NIS officer.

The officer who spoke with our Correspondent in a telephone interview from Abuja added that the affected companies usually apply for expatriate quotas to bring in skilled staff for their operation in the country, only for them to sell such quotas to human traffickers who would use it to import teenage Chinese girls into Nigeria for prostitution and other dirty jobs.

Also speaking, the leader of the team that invaded the prostitutes Hostel at Emina Crescent, off Toyin Street, Ikeja in Lagos last weekend, Joseph Omoniyi, as Assistant Superintendent of Immigration (ASI) confirmed to our Correspondent that four Lagos based Chinese companies (name withheld) have so far been indicted.

“We have already started investigation on the affected companies and soon they would be sanctioned accordingly. The offense they have committed is criminal, and that is how they shall be treated. You applied for expatriates for your company, NIS gave it to you, you now turn around to sell such quota to cartel who used it to perpetrate crime. The law is there to deal with them.”

He stated further that some companies apply for two or three expatriate quota and ended up bringing in over one dozen Chinese along with them when they are coming. “If you asked them they would tell you, they are either their children, wives, sisters/brothers or cook and stewards. It is these girls that they later turn to prostitutes. Some of these girls are used to launder money by our politicians.”

The Nigerian Immigration Service had last weekend swooped on 40 Chinese teenage girls at Emina Crescent, off Toyin Street, Ikeja in Lagos and arrested over 13 of them, stressing that the rest girls and the kingpins (husband and wife) escaped.

It was also learnt that the Chinese couple, Sun and Yin Li, who runs the ring charges the teenage girls $1,000 dollar a day. “The girls charge their clients around $2,500 dollars for a night outing. This is real exploitation and forced labour. The teenage girls are given to top business moguls, politicians and other top class socialites.”

NIS added that investigation has already begun and soon the suspects would be charged to court. “After that they will all be deported to China. But we want to appeal to anybody harbouring the run-away kingpin turn them in or such person would be treated as an accomplices.”